Most sales professionals have a negative perception of follow-up, sadly throwing away the opportunity to stand out and connect with their prospects. This week on INSIDE Inside Sales, Darryl is joined by Best-Selling author and foremost authority on the follow-up, Jeff Shore. Darryl and Jeff discuss the science behind why following-up can help you to close more deals, the optimal multi-channel strategy to leverage, as well as dispelling the myths and mental hang-ups behind why SDRs avoid the follow-up. They also talk about the wisdom of finding commonalities between you and your prospects and how following-up can lead to the benefit of referrals. Don’t miss learning how to maximize your prospect’s emotional altitude and close more deals on this episode of INSIDE Inside Sales! ''It's a matter of having people feel like they are connected, like they're being served, like somebody out there is thinking about their issues.'' 🎧 Listen as @JeffShore explains why following-up can help you to close more deals. Click To Tweet 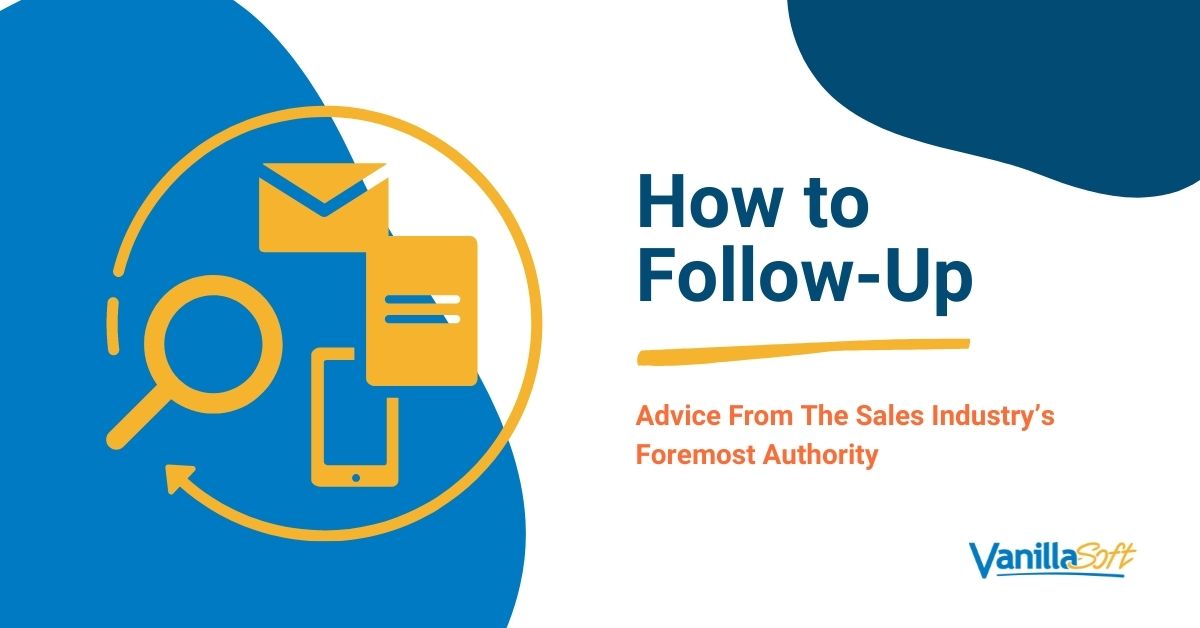 How to Follow-Up: Advice From The Sales Industry’s Foremost Authority

If you’ve been in the sales game long enough, you know that success, much like the buyer’s journey, is rarely a straight line. Often, there are more zigzags than a Dogecoin price data chart after Elon Musk poked fun of it on “Saturday Night Live.”

But ideally, the path to a sale should be elliptical –– because circling back for a follow-up can make all the difference.

Jeff is the founder and president of Shore Consulting, host of the popular sales podcast The Buyer’s Mind, and the author most recently “Follow Up and Close the Sale: Make Easy Follow-Up Your Winning Habit.”

On this episode of INSIDE Inside Sales, Jeff shares the science that backs up the follow-up, including why it can help you close more deals and how to get past your inner resistance to doing it. He also talks about how quickly you should follow up as well as what mode(s) of communication to use. It’s all about keeping your clients’ “emotional altitude” high.

And science backs that up, says Jeff.

A study by Swedish researcher Martin Lindstrom shows that, according to brain waves measured by a functional MRI, emotions rule 85% of any one decision.

Those emotions spike when we’re engaged with a product –– “when we’re trying something on or playing with it or driving it,” Jeff adds. “It’s called emotional altitude.”

Emotional altitude increases when we engage with salespeople, too. But it immediately begins to wane when we step away. That’s why follow up is crucial: to sustain emotional altitude so when they are ready to buy, we are their supplier of choice.

“It’s not simply by firing more facts and figures at them, although that’s part of the follow-up effort,” he says. “It’s a matter of having people feel like they are connected; that they’re being served –– that somebody out there is thinking about their issues, concerns, and problems.”

When Jeff was researching for his latest book, he happened to be re-reading Steven Pressfield’s “The War of Art,” a manual for dealing with creative blocks in writing, music, visual art, and more.

“He talks about this almost mythical beast he calls Resistance with a capital R,” Jeff explains.

“It’s that force that gets in the way and says: You don’t want to do this now. You’d rather do that. You want to check Facebook … Anything other than lean in. Well, that resistance definitely plays a part when it comes to sales professionals and follow-up.”

“They’ve never enjoyed it, possibly because they’ve not been trained how to do it well.”

Then their inner critic comes along and whispers: Don’t be that guy –– that telemarketer type who’s just annoying people.

Jeff agrees, by the way: You shouldn’t be that guy. But don’t think that skipping the follow-up is in your customer’s best interest. Instead, it means you fall short of the value you could provide.

Salespeople often seem to think customers don’t want them to do it, says Jeff.

“We sometimes think about our own experience –– the phone ringing during dinner and getting interrupted by a telemarketer or whatever. We find that distasteful, and it is.”

But there’s no harm in what our mutual friend Art Sobczak calls the “parole officer follow-up” approach: Just checking in.

However, the right way to think about following up is that it’s about “extending the service,” Jeff says. “If you know the customer well enough, you should never run out of material that will provide valuable resources for them in the follow-up process.”

So if you think customers don’t want to be bothered, or that they don’t want their time wasted, “here’s an idea,” he adds. “Don’t waste their time. Provide something useful and you will not have to worry.”

The need for speed

We’ve established that follow-up is important. But what’s the best way to do it?

In a word: quickly.

Before you tune out, because of course you always follow up within 24 hours, take heed.

“24 hours is a lifetime when you’ve got an active buyer shopping around,” Jeff says.

He’s right. A few years ago, VanillaSoft did a study with the Telfer School of Management that investigated sales processes based on 130 million records of interactions with buyers. Turns out your worst fear about returning messages too soon is correct, at least in business. We found that if you follow up in the first five minutes, you can negatively affect your relationship with the prospect because you might seem like a bit of a stalker.

You should wait at least 20 minutes. An hour is fine. Four hours is “the sweet spot” for Jeff but might be too long in certain scenarios. But whatever you do, don’t wait more than a day. By then, they’ve already forgotten about you.

Your follow-up needs to be delivered in an optimal format, too. As you decide whether to call, email, text, video chat, or something else, think about what Jeff calls the “communication effectiveness hierarchy.”

Face-to-face options are at the top of that totem pole. In person is best; real-time video is a close second. Voice to voice is next. They’re all what Jeb Blount would refer to as “synchronous communications,” says Jeff.

“There’s a back and forth, there’s a give and take. Then you move into asynchronous communication –– a video message, a text message … email communication is near the bottom of the list.”

Yet it’s the dominant form of follow-up in sales even though it’s the least effective in most of the ways it’s used. Interestingly, 85% of emails are never even opened.

But email and other forms of asynchronous communication have a place. If you simply need to confirm an appointment, for example, you don’t need face-to-face communication. In fact, a text may be optimal. It’s also a great way to send a thank-you text shortly after an in-person meeting, telling your client how good it was to see them.

You can do these kinds of things in “less than 30 seconds, at a cost of zero,” says Jeff. “And you’ve already stood out. It doesn’t have to be difficult.”

Remember: To extend a prospective buyer’s emotional altitude, you need to keep them connected –– quickly. Don’t look at follow-up as a series of disconnected calls, emails, or texts. Think of it as one long narrative.

Most importantly, says Jeff, “Let the message dictate the medium, not your comfort level.”