When you have a new prospect do you calmly engage with them, or do you let emotion take the lead and deluge them with an onslaught of information (AKA the word vomit)?

This week on INSIDE Inside Sales, Darryl welcomes the award-winning and brilliant rockstar head of Blue Chip CRO, Ed Porter. Darryl and Ed talk about how many deals can be lost when sales professionals pounce on a prospect, inadvertently pushing them away with pitches. They also discuss how to avoid the dreaded word vomit, offering such advice as improving your self-awareness, making use of scripting principles, and utilizing conversational analytics to measure talk time. Learn how to show restraint and keep your prospects engaged on this episode of INSIDE Inside Sales!

''When somebody picks up, you're excited. And when somebody agrees with a question that you say, then you get really excited.'' 🎧 Listen as Ed Porter shares his advice on how to hook prospects without chewing their ear off. Click To Tweet 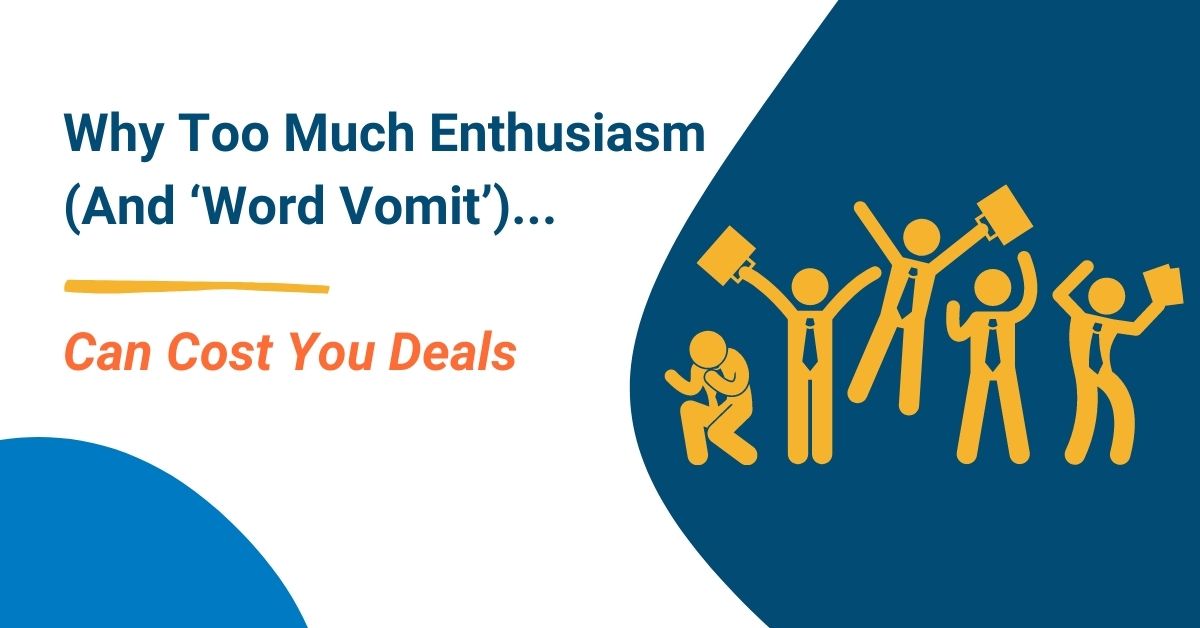 Why Too Much Enthusiasm (And ‘Word Vomit’) Can Cost You Deals

There’s a certain sound that animal owners have come to know all too well. You hear it and you immediately go into panic mode trying to find your pet as quickly as possible. Have you guessed what that sound is? Yep, you’re hearing the gagging sound of them vomiting – typically on the carpet, bed, or couch.  😖

They always seem to do it in the worst possible place and at the worst times.

That being said, horking is a part of life. Whether it’s due to bad shellfish or too much tequila, we all do it sometimes. And sometimes it’s not cookies we toss. As salespeople, we’re susceptible to “word vomit” as well.

We know it when we hear it. We hate it when our prospects (and clients) do it to us. But we’re not so great at recognizing it in ourselves, says sales leadership expert Ed Porter, COO of ContactUs Communications (formerly Blue Chip CRO at the time of podcast recording).

Think about it: “We’re all calling and striking out and not getting answers, so when somebody picks up, you’re excited,” says Ed. “And then when somebody agrees with a question you ask, you get really excited.”

Then your enthusiasm snowballs. You try to capitalize on every commonality. You begin extolling the virtues of every feature, describe every project you’ve done with other clients, brag about their (and your) success –– “going from topic to topic to topic without breathing,” Ed explains.

It’s understandable. Times are lean. You’re hungry. But don’t let your appetite get the best of you and hurl everything you’ve got at your prospects. It’s just not the best way to sell. Not by a long shot.

On this episode of INSIDE Inside Sales, Ed talks about how and why deals can be lost when you overwhelm or bore potential clients (or worse, disrespect their valuable time) by deluging them with too much information too soon. He shares his best practices for scripting, as well as using restraint to keep prospects engaged. No Pepto-Bismol required.

Fans of this show know that scripts can be a hot-button issue. Either you’re for scripting or you’re against it. Turns out Ed is somewhere in the middle.

“I’m a huge fan of scripting, but I’ll put an asterisk on it and say: not traditional word-for-word scripting,” he says. “I’m a fan of preparing.”

You need to know what you want to say when somebody picks up the phone for a discovery call or a demo –– and how to deal with concerns midway through a demo or transition from either of those to a deal-sealing meeting.

Ed’s best advice comes from the legendary Mike Brooks, author of “Power Phone Scripts,” who says that forecasting options for prospect calls is key. After all, we can probably list at least a few reasons why people resist.

“Why not have some things in your wheelhouse to help overcome those?” he asks.

We might think a script means a word-for-word text. But a script can also be a bulleted list of talking points that outline where you want the conversation to go, Ed says. And it can keep you from veering into word-vomit territory.

He finds that when salespeople memorize a narrative, they’re sometimes prepared so well that they “pounce” at the slightest spark of interest, go off on tangents, or just generally overextend themselves.

Hold back to move forward

Although word vomit can strike at any time –– from a discovery call to a polished pitch to all the relevant stakeholders at an organization, Ed thinks the demo is “where you need to exert the most amount of restraint.”

That’s because word vomiting can easily take over a demo when you’re showing a prospect your solution.

Remember, a demo is less about showing off your solution as a product in general and more about targeting that solution to a prospect’s unique pain points (which, naturally, you learned in the discovery phase).

So as you prepare for a demo, think about how to best showcase a feature that can help solve their problems. As you show them how it works (and/or how to use it), ask them: How do you see this helping you? How do you see this changing your operation for the better? Have you tried to solve this problem this way before?

Those types of questions help your prospect imagine what it would be like to use your product. But what’s even more important is that you’re letting them talk –– about how they might see your product solving their problem.

“That’s going to give you a springboard,” Ed says. “It’s just like a counselor when they talk to a patient.”

To put it another way, you should encourage prospects to ask questions that address the issues you identify –– and give you the answers, too –– while you guide the conversation.

A smart script forces us to ask pointed questions –– “and then shut up because we need to get the answers,” Ed adds. “I find that when you’re pouncing and word vomiting, you’re not listening. In my experience, if you make a disciplined habit of listening, you consequently dramatically reduce the word vomit.”

The queen’s gambit: Shut up and shut it down

Preventing word vomit definitely involves self-awareness, but the most important advice Ed shares is to take control of the call.

What does that mean? Ed starts with what it’s not.

“Controlling the call doesn’t mean talking the whole time,” says Ed. “It means understanding where you want to go.”

He thinks of sales calls as a game –– specifically, chess.

“You’re playing several moves ahead,” he adds. “How do you anticipate those moves? How do you respond to some kind of deviation from that expectation?”

Words of wisdom: To do that, you have to listen more than you talk.

“It’s called a conversation for a reason,” Ed says. “It’s to converse. Ask for information, receive information, build a dialogue.”