Stop me if this sounds familiar – you build the perfect cold calling script, complete all the trainings on how to cold call sales leads, pick up the phone, and start calling prospects. After a couple of phone calls, you get into a rhythm: call, voicemail, hang up, record in CRM, repeat. Then, suddenly, someone answers…and you freeze up. None of the training told you this would happen!? The prospect keeps saying, “Hello?” and hangs up after you stumble or say nothing for 5 seconds. Don’t be afraid. You’re not alone.

While this is more common when new to cold calling, even veterans can get stumped. Think of it like singing the national anthem – you know every professional knows all the words, yet every couple years, some major star screws it up live. The fact is the human brain does freeze up occasionally – especially when it’s stuck in a routine, and something disrupts that routine.

So how do you prevent yourself from freezing up when a decision-maker picks up?

Human beings have something called a stress response process – a chemical process that kicks in when we perceive a threat in the animal brain (specifically the amygdala). You’ve heard of “fight or flight”? That’s what we’re talking about.

Now think about the last time you saw an animal in the middle of traffic. Still, as stone – you can honk and scream at them to move for 30 seconds or 20 minutes, but they barely blink. They’re completely frozen until they aren’t, and suddenly they spring into a blur of motion and scamper away.

This reaction is the third part of the Trauma Reaction Process – FREEZE. The “freeze” instinct kicks in when a prospect answers, and you can’t remember the name of the company you work for.

The fact is your brain is trying to protect you by “freezing” you – it’s attempting to slow down your thought processes so you can react properly to the threat. The hormones being released by this harmless but stressful event cause your mind to go blank. Then you panic more because trying to remember becomes another stressor, which makes the “blankness” worse. Now you’re in a vicious cycle, and your prospect hangs up because you were silent for 5 seconds.

This video is a great 5 minute summary on the relationship between this stress response and your memory. (And can explain what’s happening with much cooler graphics and alacrity than I can muster)

How to Prevent Freezing

Nearly every sales rep will freeze on a call at some point in their career. Whether it’s during cold calling or in the middle of a client presentation (ever seen Shark Tank – those entrepreneurs prep for months and at least once an episode someone freezes in the middle of their opening statement), your brain will at some point get its wires crossed and misinterpret stress as a threat triggering a freeze response.

But there’s good news! You can take small steps to avoid triggering this response and limit the duration when it does it.

Now for some real talk. Even if you do everything above, you will still have moments when you’ll freeze. Maybe a text arrives from a family member and you see the preview as the client picks up the phone (another reason to keep your desk clean/put away your phone while calling…but that’s another issue) – it can rattle you enough to make you forget who and why you’re calling. Life happens, and the first step to dealing with it is to have a plan.

What to Do When You Freeze

Hopefully, now you better understand why it’s so common to freeze in a sales pitch or on a cold call and have some ideas to reduce the number of times it happens to you. Potential customers are likely more understanding than you expect as long as you don’t give up. Just keep trying and pay attention to the stressors in your sales life. Remove what you can, manage the rest, and prepare for the moment your brain goes blank.

Those of you who have mastered pushing past the fight/flight/freeze response – what helped you? What tricks did you pick up that got you in the door regardless of the freeze? Do you have any horror or funny stories about a time when you froze on a call? The first step is admitting it can and will happen – the second is dealing with it; the third is sharing your experience and learning from it. You got this. 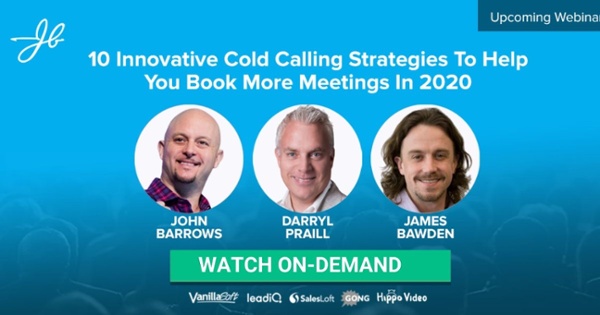