Prospects can tell when you use a sales call script. By now, they must be pros at identifying such communications coming their way. When it sounds like narration rather than a conversation, you make your prospects feel like mere names on a list. They likely roll their eyes and move on with their day after brushing you off. It could be a polite brush-off, such as “email me the information,” or an abrupt hang-up. Not good news for the cold callers!

Does this mean you need to do away with scripts altogether and rely on spontaneity alone? Certainly not.

Not every sales rep is a rock star who can spontaneously carry out crisp and meaningful conversations with strangers. However, even rock star reps need a script at some level. Seasoned salespeople may not be as dependent on a script as new reps, but they use scripts to organize their thoughts and then let the conversation flow naturally.

Not every sales rep is a rock star 🎸who can spontaneously carry out crisp and meaningful conversations with strangers. Get #SalesTips to avoid sounding like you're using a script. #prospecting Click To Tweet

Either way, phone scripts are here to stay, and they belong here. The problem is not the writeup itself (not counting the poorly written ones). The issue is “sounding like you’re reading a cold call script.”

“I love it when I talk to a sales professional who sounds like a robot,” said no prospect ever.

Selling is an emotional as well as an intellectual endeavor, and robots do not emote, which is precisely the reason why prospects respond to personalization. Reading makes it seem like you don’t know what you are talking about and lack knowledge. So why should the prospect listen to you?

The trick is to ensure that only you can “see” the script. Never let the prospect suspect that somebody else authored what you’re saying.

Scripts often miss the very ingredients that make the sauce saucy. A communication experience must feel authentic. For that, the deliverer must be comfortable with the script. We have seen award-winning movie dialogues fall flat because of the way the actors delivered them and vice versa. Is the available text a good fit for you? Read aloud and see how it sounds. If it still falls flat, try our advice on how to follow a sales script without sounding scripted.

Everyone knows the first few minutes of a sales call hinges on a great start. However, opening a sales call can be uncomfortable, as many “Um… so… how are you doing?” callers know too well.

A quick introduction must be immediately followed by the purpose when you start a conversation. It keeps you both on the same page. For this, have a loose, flexible script around which you can weave your magic.

And please, use their names a few times. Dale Carnegie once said: “A person’s name is to him or her the sweetest sound in any language.” You’re talking to them, not at them. Keep this in mind before you launch into your pitch.

2. Manage your modulation, pace, and tone

Who knew a sales job could prepare you for an alternative career as a voice actor? Now, while we can’t all sound like James Earl Jones or Maggie Smith,  during a phone conversation, focus on making the most potent use of the power of our natural voice. Your voice is your tool. There is a world of difference in how you sound to yourself and how you sound to others. Perform the script and record it on your phone. Listen to it. The more you fine-tune your voice, the better your performance will be.

Buying is an emotional decision, and the rep’s script delivery has a lot to do with evoking positive/negative feelings in the prospect. In cold calls, it is the sales reps’ voice and the level of performance that eventually “sell” the product. The right tone and pace keep you from sounding phony and makes the conversation look raw and unscripted.

During a call, particularly when you’re following a script, it’s easy to get carried away when you’re trying to make sure you cover all the points. When this happens, “listening” takes a backseat. Many salespeople pause while the prospects talk. But because they are eager to return to the scripted spiel, they tend to listen passively. They then continue with the script as if the interruption or objection didn’t happen. This is a mistake.

You try to position your company as one that understands the prospect’s struggles and has resolved similar challenges in the past. For that, you need to listen – an integral part of sales processes. When you directly address or refer back to something the prospect said previously, you let them know that their issues are important to you. Prospecting is an active thing a rep has to do — and even the listening part of prospecting has to be active too.

4. Mind when the call goes off-script

There will be times when your conversation with a prospect takes an unexpected turn away from the general path of the script. You cannot always control the conversation. So, don’t think you can brush aside objections or interruptions, which you feel might disrupt the script. To the prospect, you are having a conversation. Forcing the discussion back to your spiel will reveal you are scripted. It also tells the prospect that this call was not about them and their story, but about YOU and your story.

Sometimes it is better to improvise and go off the script to address the prospects’ concerns. You can always return to the script later if it makes sense, or jump to qualifying questions and cover other key qualifying points from the script.

5. Embrace the silences and don’t rush to fill them

The first and most obvious sign of nervousness is speaking fast. Sales managers always warn their teams against babbling for this reason. Your mile-a-minute ramble exposes your nervousness and uncertainty, which takes away credibility.

Does a simple “Hmm…” set your heart racing?

Relax! You’re not on a timer. When you ask a question, and the lead takes an extra few seconds to answer, it’s okay. Don’t panic and rush to close the conversation gaps. If they are taking time to respond, it means they are engaging with you and are taking you seriously.

Collect yourself and say to yourself, “It’s nothing to worry about. The prospect is most probably not following a script.”

6. Mind how you close the call

A small recap is in order. Nothing too elaborate, please.

Go ahead and say something like, “Okay, so we’re in agreement here. I’ll send the case study and whitepaper we have on the subject in an hour. If you have any questions, please send an email. I will call you back next Tuesday to talk more about [the product or service].” Be clear that everybody is on the same page.

By the time the call is ending, the prospect’s name by now should roll off your tongue. You read this earlier, but it bears repeating: “a person’s name is to him or her the sweetest sound in any language.”

Cheers! This is all there is to conversing without sounding scripted. You have a framework worth following.

Are you ready to walk this talk?

Calling strangers can be intimidating, and scripts can be a lifesaver to many salespeople. It is comforting to know that you won’t miss any important point or fumble when explaining something. However, you also need to remember not to sound robotic or as if you are reading. The above tips can help to keep your scripts 100% authentic. It only takes a bit of familiarity with your script and active listening to make a memorable chat. Let the scripts be visible only to you. 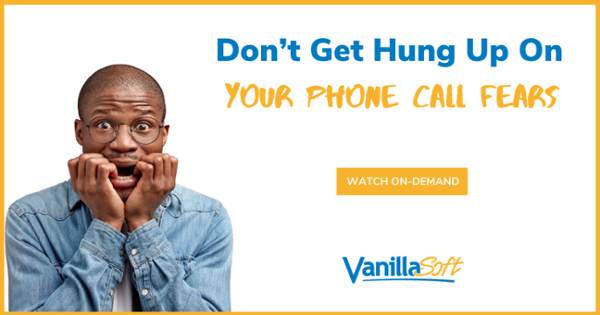